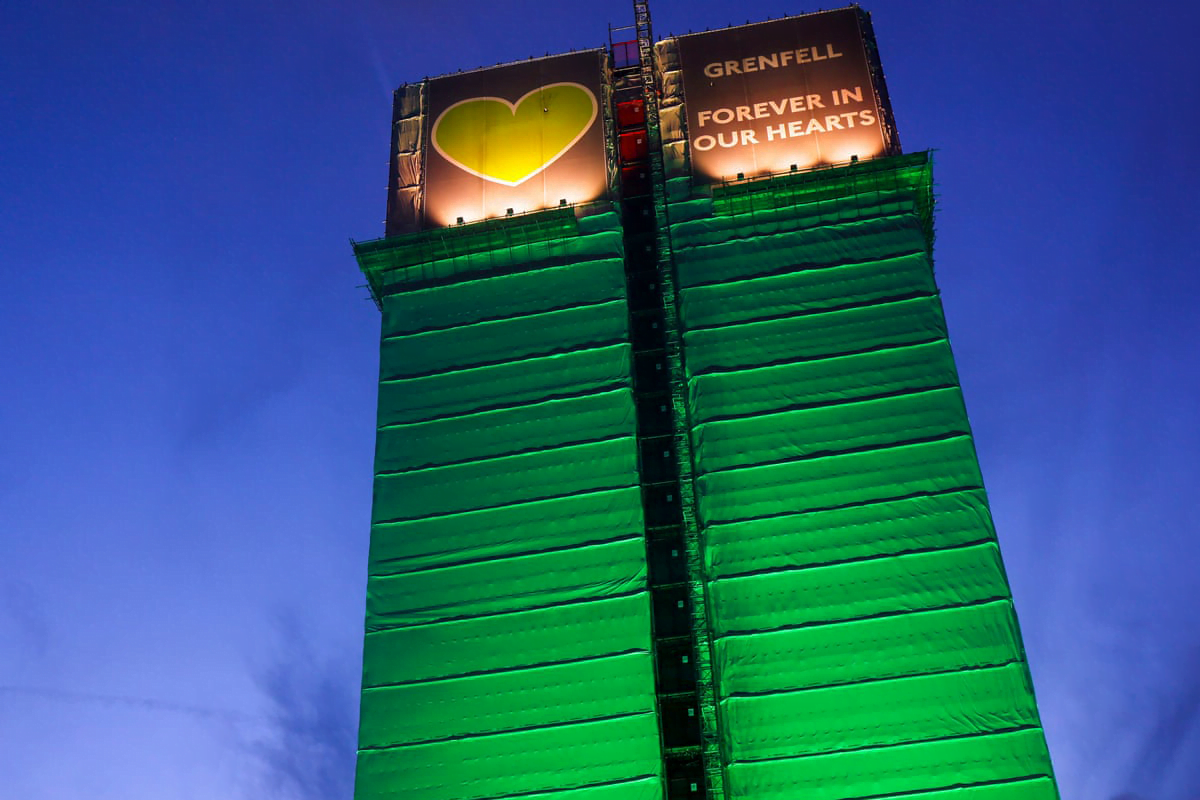 Grenfell – four years on and nothing has changed

The wrapped wreck of the burnt-out Grenfell Tower is still visible from the route of Notting Hill Carnival four years after the devastating fire on 14 June 2017 that killed 72 people.

Despite an ongoing inquiry confirming beyond all reasonable doubt that the tower’s highly flammable cladding was the main factor in the fire’s spread, little has been done to remove similar combustible cladding from other blocks around the UK. Building owners (including councils) and property management companies have still not removed cladding that daily puts at risk the lives of an estimated 700,000 residents.

A fire in a Hotpoint fridge-freezer spread to Grenfell Tower’s cladding and insulation, installed by Osborne Berry. Feeding on the inflammable materials, the blaze soon engulfed the block. RBKC’s dysfunctional Tenant Management Organisation had repeatedly ignored residents’ complaints about the way the block was being refurbished. The London Fire Brigade compounded the disaster by telling residents to stay in their flats as the fire took hold ‑ and then were unable to rescue them in time.

The inquiry has heard shocking allegations about a reckless disregard for safety on the part of cladding and insulation manufacturers Arconic, Celotex and Kingspan. Almost every company and organisation involved with the Grenfell refurbishment is revealed to have used deception to sell or install materials that were unsuitable for use on high-rise buildings.

For the tower’s managers, architects, consultants and suppliers, the priority is to wriggle out of responsibility. For survivors and relatives of those who perished, the focus is the long search for truth and justice. For North Kensington’s close-knit community, the slogan on the charred tower’s plastic wrap says it all: Grenfell – forever in our hearts.

Honouring the Inventor of Soca – Ras Shorty I

My Trinishop is two years old

Honouring the Inventor of Soca – Ras Shorty I

My Trinishop is two years old

Mon 15 Aug 2022
© 2021 Soca News, 86-90 Paul Street, London, EC2A 4ND
We use cookies on our website to give you the most relevant experience by remembering your preferences and repeat visits. By clicking “Accept All”, you consent to the use of ALL the cookies. However, you may visit "Cookie Settings" to provide a controlled consent.
Cookie SettingsAccept All
Manage consent

This website uses cookies to improve your experience while you navigate through the website. Out of these, the cookies that are categorized as necessary are stored on your browser as they are essential for the working of basic functionalities of the website. We also use third-party cookies that help us analyze and understand how you use this website. These cookies will be stored in your browser only with your consent. You also have the option to opt-out of these cookies. But opting out of some of these cookies may affect your browsing experience.
Necessary Always Enabled
Necessary cookies are absolutely essential for the website to function properly. These cookies ensure basic functionalities and security features of the website, anonymously.
Functional
Functional cookies help to perform certain functionalities like sharing the content of the website on social media platforms, collect feedbacks, and other third-party features.
Performance
Performance cookies are used to understand and analyze the key performance indexes of the website which helps in delivering a better user experience for the visitors.
Analytics
Analytical cookies are used to understand how visitors interact with the website. These cookies help provide information on metrics the number of visitors, bounce rate, traffic source, etc.
Advertisement
Advertisement cookies are used to provide visitors with relevant ads and marketing campaigns. These cookies track visitors across websites and collect information to provide customized ads.
Others
Other uncategorized cookies are those that are being analyzed and have not been classified into a category as yet.
SAVE & ACCEPT
X